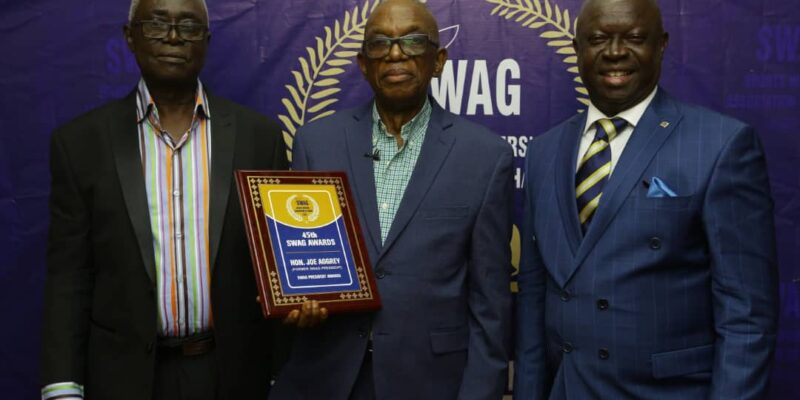 Former president of the Sports Writers’ Association of Ghana (SWAG), Mr. Joe Aggrey has been honoured with the SWAG President Award whilst Mr. Oteng Aboagye, former general secretary of the Ghana Athletics Association received a meritorious award at the 45th edition of the annual SWAG Awards.

Hon. Joe Aggrey, a celebrated, an illustrious and worshipful son of sports of the land, an honorable and elevated Patron of the Sports Writers’ Association of Ghana (SWAG) was decorated with the SWAG President’s Award for his dedication to the course of SWAG.

Hon. Joe rose through the ranks to become the General secretary of SWAG and his unwavering and persevering traits ensured he ascended the throne as the President of the Association.

For 10 continuous years, he led SWAG with invaluable and sacramental disposition, with great integrity and selflessness.

Under the sterling leadership of Hon. Joe Aggrey, SWAG became the envy of all and his exploits did not go unnoticed.

For the first time in the history of this nation, a sports journalist, Hon. Joe Aggrey was deservedly crowned as the overall journalist of the year, a feat that till date has not been iterated.

In recognition of his unravishing qualities, Big Joe as affectionately called was appointed the deputy sports minister in the John Agyekum Kuffour administration.

Sports journalists over the years always looked up to him in good times and challenging moments and as a patron of SWAG, never did he turned his back, offering the needed counsel, admonition and caution when needed.

President Kwabena in a citation for the former President of SWAG said “It is a particularly tremendous pleasure that on such a momentous occasion, I have the singular honour to dignify and adorn a man I have taken a great deal of inspiration from all my life. We at SWAG, have plenty of reasons to celebrate you Sir”.

SWAG at the same ceremony honoured Mr. Emmanuel Oteng Aboagye, a former deputy secretary for the GFA with a meritorious award for his contribution to sports administration and development.

Mr. Oteng Aboagye, who became the general Secretary at the peak of Ghana athletics, also managed Achimota Golf Club in Accra and the Royal Golf Club in Kumasi.

Mr. Oteng Aboagye is remembered for pioneering women’s football in Ghana with the likes of Sophia Okuley and Nancy Thompson.

His citation by SWAG read: “You are on record as one of the best sports administrators in Ghana having served the Ghana Athletics Association as the General Secretary, the Ghana Football Association as a General Secretary and the Achimota Golf Club as the administrator. SWAG honors you today for having influenced the development of sports and being the pioneer for Women’s Football as a founding member”. 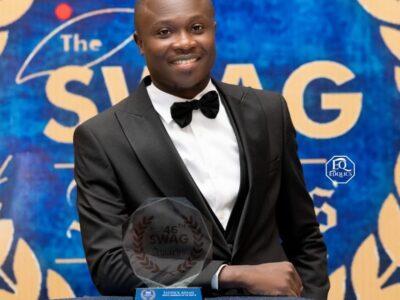